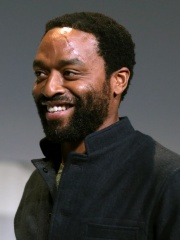 Chiwetel Umeadi Ejiofor ( CHOO-ə-tel EJ-ee-oh-for; born 10 July 1977) is a British actor. He is the recipient of various accolades, including a BAFTA Award, a Laurence Olivier Award, an NAACP Image Award, and nominations for an Academy Award, two Primetime Emmy Awards, three Screen Actors Guild Awards and five Golden Globe Awards. After enrolling at the National Youth Theatre in 1995 and attending the London Academy of Music and Dramatic Art, at age 19 and three months into his course, Ejiofor was cast by Steven Spielberg to play a supporting role in the film Amistad (1997) as James Covey.Ejiofor portrayed the characters Okwe in Dirty Pretty Things (2002), Lola in Kinky Boots, Victor Sweet in Four Brothers, The Operative in Serenity (all 2005), Thabo Mbeki in Endgame, Adrian Helmsley in Roland Emmerich's 2012 (both 2009), Darryl Peabody in Salt (2010), Solomon Northup in 12 Years a Slave (2013), Vincent Kapoor in Ridley Scott's The Martian (2015), Karl Mordo in Doctor Strange (2016) and Doctor Strange in the Multiverse of Madness (2022), and Trywell Kamkwamba in The Boy Who Harnessed the Wind (2019). Read more on Wikipedia