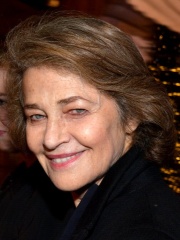 Tessa Charlotte Rampling (born 5 February 1946) is an English actress, model and singer, known for her work in European arthouse films in English, French, and Italian. An icon of the Swinging Sixties, she began her career as a model and later became a fashion icon and muse.She was cast in the role of Meredith in the 1966 film Georgy Girl, which starred Lynn Redgrave. She soon began making French and Italian arthouse films, most notably during this time in Luchino Visconti's The Damned (1969) and Liliana Cavani's The Night Porter (1974). Read more on Wikipedia

Since 2007, the English Wikipedia page of Charlotte Rampling has received more than 3,726,097 page views. Her biography is available in 127 different languages on Wikipedia making her the 114th most popular actor.