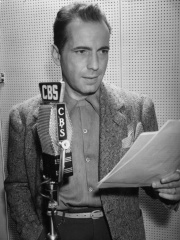 Humphrey DeForest Bogart (; December 25, 1899 – January 14, 1957), nicknamed Bogie, was an American film and stage actor. His performances in Classical Hollywood cinema films made him an American cultural icon. In 1999, the American Film Institute selected Bogart as the greatest male star of classic American cinema.Bogart began acting in Broadway shows, beginning his career in motion pictures with Up the River (1930) for Fox and appeared in supporting roles for the next decade, regularly portraying gangsters. Read more on Wikipedia

Humphrey Bogart is most famous for his role as Rick Blaine in the 1942 film Casablanca.

Among actors, Humphrey Bogart ranks 78 out of 9,996. Before him are Judy Garland, Michael Caine, Steve McQueen, Will Smith, Johnny Depp, and Paul Newman. After him are Hedy Lamarr, Robert Redford, Toshiro Mifune, Tom Hanks, Samuel L. Jackson, and Gregory Peck.