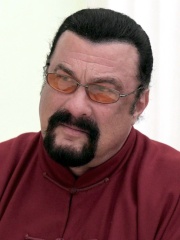 Steven Frederic Seagal (; born April 10, 1952) is an American actor, screenwriter, producer, martial artist, and musician. Seagal was born in Lansing, Michigan. A 7th-dan black belt in aikido, he began his adult life as a martial arts instructor in Japan, becoming the first foreigner to operate an aikido dojo in the country. Read more on Wikipedia

Steven Seagal is an American actor, producer, screenwriter, and martial artist who holds a 7th-degree black belt in Aikido. He is best known for his roles in action films, such as "Above the Law", "Under Siege", "Hard to Kill", "Out for Justice", "Marked for Death", "On Deadly Ground", "Under Siege 2: Dark Territory", "The Glimmer Man", "Exit Wounds", "Half Past Dead", "Lawman", "Ticker", "The Foreigner", "Maximum Conviction", and "Force of Execution".