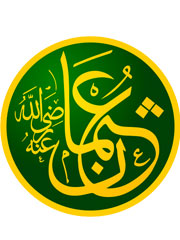 Uthman ibn Affan (Arabic: عثمان بن عفان, romanized: ʿUthmān bin ʿAffān; c. 573 or 576 – 17 June 656 CE), also spelled by Colloquial Arabic, Turkish and Persian rendering Osman, was a second cousin, son-in-law and notable companion of the Islamic prophet Muhammad, as well as the third of the Rāshidun, or "Rightly Guided Caliphs". Born into a prominent Meccan clan, Banu Umayya of the Quraysh tribe, he played a major role in early Islamic history, and is known for having ordered the compilation of the standard version of the Quran. Read more on Wikipedia

Uthman was the third caliph of Islam. He was a successful administrator and is most famous for compiling the Quran into a single text.

Page views of Uthmen by language

Among politicians, Uthman ranks 97 out of 15,577. Before him are Leonid Brezhnev, Louis XV of France, Giuseppe Garibaldi, Henry IV of France, Wilhelm II, German Emperor, and Murad IV. After him are Mary, Queen of Scots, Theodosius I, Kim Il-sung, Frederick I, Holy Roman Emperor, Pontius Pilate, and Mehmed III.