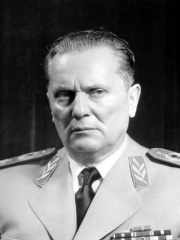 Josip Broz (Serbo-Croatian Cyrillic: Јосип Броз, pronounced [jǒsip brôːz]; 7 May 1892 – 4 May 1980), commonly known as Tito (; Serbo-Croatian Cyrillic: Тито, pronounced [tîto]), was a Yugoslav communist revolutionary and statesman, serving in various positions of national leadership from 1943 until his death in 1980. During World War II, he was the leader of the Yugoslav Partisans, often regarded as the most effective resistance movement in German-occupied Europe. Read more on Wikipedia

Josip Broz Tito was the first president of Yugoslavia, and he is most famous for uniting the country after World War II.

Among politicians, Josip Broz Tito ranks 59 out of 15,577. Before him are Nebuchadnezzar II, Nikita Khrushchev, Marcus Aurelius, Fidel Castro, Ahmed I, and Martin Van Buren. After him are Benjamin Franklin, Mehmed the Conqueror, Nicholas II of Russia, Henry Kissinger, John F. Kennedy, and Margaret Thatcher.