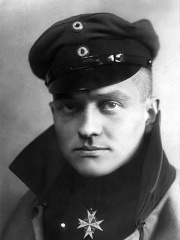 Manfred Albrecht Freiherr von Richthofen (2 May 1892 – 21 April 1918), known in English as Baron von Richthofen, and most famously as the "Red Baron", was a fighter pilot with the German Air Force during World War I. He is considered the ace-of-aces of the war, being officially credited with 80 air combat victories. Originally a cavalryman, Richthofen transferred to the Air Service in 1915, becoming one of the first members of fighter squadron Jagdstaffel 2 in 1916. He quickly distinguished himself as a fighter pilot, and during 1917 became leader of Jasta 11 and then the larger fighter wing unit Jagdgeschwader 1, better known as "The Flying Circus" or "Richthofen's Circus" because of the bright colours of its aircraft, and perhaps also because of the way the unit was transferred from one area of allied air activity to another – moving like a travelling circus, and frequently setting up in tents on improvised airfields. Read more on Wikipedia

Since 2007, the English Wikipedia page of Manfred von Richthofen has received more than 4,182,643 page views. His biography is available in 56 different languages on Wikipedia making him the 59th most popular military personnel.

Most Popular MILITARY PERSONNELS in Wikipedia