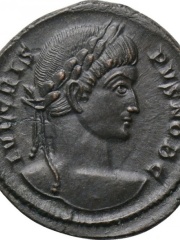 Flavius Julius Crispus (; c. 300 – 326) was the eldest son of the Roman emperor Constantine I, as well as his junior colleague (caesar) from March 317 until his execution by his father in 326. The grandson of the augustus Constantius I, Crispus was the elder half-brother of the future augustus Constantine II and became co-caesar with him and with his cousin Licinius II at Serdica, part of the settlement ending the Cibalensean War between Constantine and his father's rival Licinius I. Crispus ruled from Augusta Treverorum (Trier) in Roman Gaul between 318 and 323 and defeated the navy of Licinius I at the Battle of the Hellespont in 324, which with the land Battle of Chrysopolis won by Constantine forced the resignation of Licinius and his son, leaving Constantine the sole augustus and the Constantinian dynasty in control of the entire empire. Read more on Wikipedia

Since 2007, the English Wikipedia page of Crispus has received more than 320,925 page views. His biography is available in 32 different languages on Wikipedia. Crispus is the 2,681st most popular politician (down from 2,221st in 2019), the 21st most popular biography from Croatia (down from 17th in 2019) and the 8th most popular Croatian Politician.

Crispus is most famous for being the son of Constantine I, the Roman Emperor who converted to Christianity and made it the official religion of the Roman Empire.

Page views of Crispuses by language