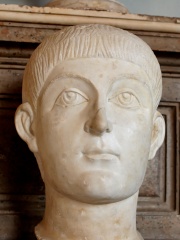 Valens (Greek: Ουάλης, translit. Ouálēs; 328 – 9 August 378) was Roman emperor from 364 to 378. He was the younger brother of the emperor Valentinian I, who gave Valens the eastern half of the Roman Empire to rule. Read more on Wikipedia

Since 2007, the English Wikipedia page of Valens has received more than 776,142 page views. His biography is available in 64 different languages on Wikipedia (up from 62 in 2019). Valens is the 593rd most popular politician (down from 524th in 2019), the 6th most popular biography from Croatia and the 4th most popular Croatian Politician.

Page views of Valens by language

Among politicians, Valens ranks 593 out of 15,577. Before him are Herbert Hoover, Oscar II of Sweden, Frederick William IV of Prussia, Epaminondas, Shah Jahan, and Khosrow I. After him are Darius II, Hans Frank, Ivan III of Russia, Ptolemy XIV of Egypt, Wilhelmina of the Netherlands, and Henry II, Holy Roman Emperor.