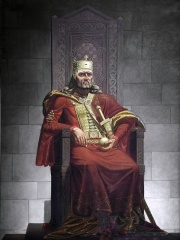 Tomislav (pronounced [tǒmislaʋ], Latin: Tamisclaus) was the first king of Croatia. He became Duke of Croatia c. 910 and was crowned king in 925, reigning until 928. During Tomislav's rule, Croatia forged an alliance with the Byzantine Empire against Bulgaria. Read more on Wikipedia

Tomislav of Croatia is most famous for being the first king of the Croatian Kingdom in 925.

Page views of Tomislav of Croatias by language

Among politicians, Tomislav of Croatia ranks 3,163 out of 15,577. Before him are Antipater the Idumaean, Mohammad-Ali Rajai, Theudebald, Ólafur Ragnar Grímsson, Baldwin I, Margrave of Flanders, and Topa Inca Yupanqui. After him are Qazi Muhammad, Albrecht von Roon, Joachim Frederick, Elector of Brandenburg, Maria of Alania, Sultan Husayn Bayqara, and Netjerkare Siptah.