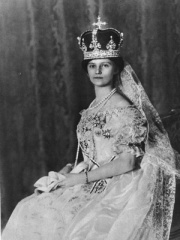 Zita of Bourbon-Parma (Zita Maria delle Grazie Adelgonda Micaela Raffaela Gabriella Giuseppina Antonia Luisa Agnese; 9 May 1892 – 14 March 1989) was the wife of Charles, the last monarch of Austria-Hungary. As such, she was the last Empress of Austria and Queen of Hungary, in addition to other titles. She is venerated in the Catholic Church, having been declared Servant of God by Pope Benedict XVI. Born as the seventeenth child of the dispossessed Robert I, Duke of Parma, and his second wife, Infanta Maria Antonia of Portugal, Zita married the then Archduke Charles of Austria in 1911. Read more on Wikipedia

Page views of Zita of Bourbon-Parmas by language

Among companions, Zita of Bourbon-Parma ranks 40 out of 687. Before her are Victoria, Princess Royal, Elisabeth of Valois, Madame du Barry, Marie Leszczyńska, Eugénie de Montijo, and Caroline of Ansbach. After her are Salman the Persian, Isabella of France, Maria Carolina of Austria, Elizabeth Woodville, Anne Hathaway, and Magda Goebbels.