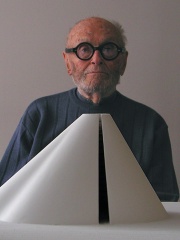 Philip Cortelyou Johnson (July 8, 1906 – January 25, 2005) was an American architect best known for his works of modern and postmodern architecture. Among his best-known designs are his modernist Glass House in New Canaan, Connecticut; the postmodern 550 Madison Avenue in New York, designed for AT&T; 190 South La Salle Street in Chicago; the Sculpture Garden of the Museum of Modern Art; and the Pre-Columbian Pavilion at Dumbarton Oaks. In his obituary in 2005, the "New York Times" wrote that his works "were widely considered among the architectural masterpieces of the 20th century."In 1930, Johnson became the first director of the architecture department of the Museum of Modern Art in New York. Read more on Wikipedia

Philip Johnson is most famous for his work on the Glass House, which he designed in 1949 and is now a National Historic Landmark.