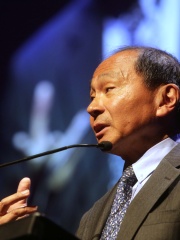 Francis Yoshihiro Fukuyama (; born October 27, 1952) is an American political scientist, political economist, international relations scholar and writer. Fukuyama is known for his book The End of History and the Last Man (1992), which argues that the worldwide spread of liberal democracies and free-market capitalism of the West and its lifestyle may signal the end point of humanity's sociocultural evolution and political struggle and become the final form of human government, an assessment met with criticisms. In his subsequent book Trust: Social Virtues and Creation of Prosperity (1995), he modified his earlier position to acknowledge that culture cannot be cleanly separated from economics. Read more on Wikipedia

Fukuyama is most famous for his book The End of History and the Last Man, which argues that Western liberal democracy is the final form of human government.