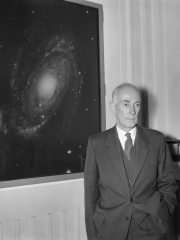 Jan Hendrik Oort ( or ; 28 April 1900 – 5 November 1992) was a Dutch astronomer who made significant contributions to the understanding of the Milky Way and who was a pioneer in the field of radio astronomy. His New York Times obituary called him "one of the century's foremost explorers of the universe"; the European Space Agency website describes him as "one of the greatest astronomers of the 20th century" and states that he "revolutionised astronomy through his ground-breaking discoveries." In 1955, Oort's name appeared in Life magazine's list of the 100 most famous living people. He has been described as "putting the Netherlands in the forefront of postwar astronomy."Oort determined that the Milky Way rotates and overturned the idea that the Sun was at its center. Read more on Wikipedia

Since 2007, the English Wikipedia page of Jan Oort has received more than 248,940 page views. His biography is available in 58 different languages on Wikipedia (up from 56 in 2019). Jan Oort is the 38th most popular astronomer (down from 32nd in 2019), the 76th most popular biography from Netherlands (down from 58th in 2019) and the most popular Dutch Astronomer.

Jan Oort is most famous for his theory of the Oort Cloud, which is a vast region of icy objects that surrounds the solar system.

Among ASTRONOMERS In Netherlands