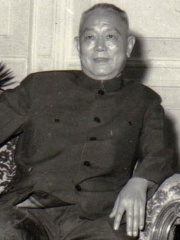 Li Xiannian (pronounced [lì ɕjɛ́nnjɛ̂n]; 23 June 1909 – 21 June 1992) was a Chinese Communist military and political leader, President of the People's Republic of China (de jure head of state) from 1983 to 1988 under Paramount Leader Deng Xiaoping and then Chairman of the Chinese People's Political Consultative Conference from 1988 until his death. He was a full member of the Politburo from 1956 to 1987, and of its Standing Committee from 1977 to 1987.Li worked as an apprentice carpenter in his teenage years to support his family. He joined the Communist Party in December 1927 and became a soldier in the Chinese Red Army. Read more on Wikipedia

Among politicians, Li Xiannian ranks 1,682 out of 15,577. Before him are Lon Nol, Mohammed V of Morocco, John Kerry, Leopold, Duke of Lorraine, Shapur II, and Teti. After him are Béla I of Hungary, Senusret I, Achaemenes, Glycerius, Emperor Suizei, and Humayun.