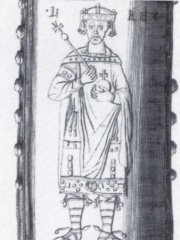 Louis the Child (893 – 20/24 September 911), sometimes called Louis III or Louis IV, was the king of East Francia from 900 until his death in 911 and was the last ruler of the Carolingian dynasty there. He succeeded his father, king Arnulf of Carinthia in 899, when he was six and reigned until his death aged 17 or 18. Louis also inherited the crown of Lotharingia with the death of his elder illegitimate half-brother Zwentibold in 900. Read more on Wikipedia

Louis the Child is a DJ duo that consists of Robby Hauldren and Freddy Kennett. They are best known for their remixes of popular songs, such as "One Dance" by Drake, "Love On Me" by Galantis, and "I'm The One" by DJ Khaled.

Page views of Louis the Children by language

Among politicians, Louis the Child ranks 1,297 out of 15,710. Before him are Herod Archelaus, Philip V of Macedon, Charles III of Naples, Frederick IV of Denmark, Yang Shangkun, and Marwan II. After him are Eleftherios Venizelos, John II Casimir Vasa, Queen Seondeok of Silla, Dolores Ibárruri, Gudea, and Stephen, King of England.