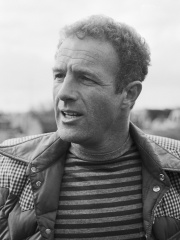 James Edmund Caan ( KAHN; born March 26, 1940) is an American actor who has been nominated for several awards, including four Golden Globes, an Emmy and an Oscar. Caan was awarded a motion pictures star on the Hollywood Walk of Fame in 1978.After early roles in Howard Hawks's El Dorado (1966), Robert Altman's Countdown (1967) and Francis Ford Coppola's The Rain People (1969), he came to prominence for playing his signature role of Sonny Corleone in The Godfather (1972), for which he was nominated for the Academy Award for Best Supporting Actor and the Golden Globe for Best Supporting Actor. He reprised the role of Sonny Corleone in The Godfather Part II (1974) with a cameo appearance at the end. Caan had significant roles in films such as Brian's Song (1971), Cinderella Liberty (1973), The Gambler (1974), Rollerball (1975), A Bridge Too Far (1977) and Alan J. Read more on Wikipedia

James Caan is most famous for playing Sonny Corleone in the 1972 film, The Godfather.