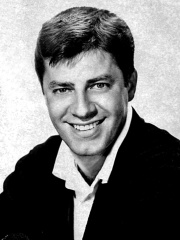 Jerry Lewis (born Joseph Levitch; March 16, 1926 – August 20, 2017) was an American comedian, actor, singer, filmmaker and humanitarian, who appeared in 60 films and is dubbed "The King of Comedy". He gained his career breakthrough with singer Dean Martin; became Martin and Lewis in 1946 and performed together until their acrimonious breakup in 1956. Lewis then pursued a solo career as a performer and actor, worked behind-the-scenes as director, producer and screenwriter, appeared in numerous television programs, performed comedy routines on concert stages and in nightclubs and released many album recordings as a singer. Read more on Wikipedia

Since 2007, the English Wikipedia page of Jerry Lewis has received more than 8,946,004 page views. His biography is available in 72 different languages on Wikipedia making him the 221st most popular actor.