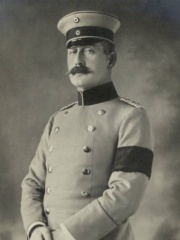 Maximilian, Margrave of Baden (Maximilian Alexander Friedrich Wilhelm; 10 July 1867 – 6 November 1929), also known as Max von Baden, was a German prince, general, and politician. He was heir presumptive to the throne of the Grand Duchy of Baden, and in October and November 1918 briefly served as the last chancellor of the German Empire and minister-president of Prussia. He sued for peace on Germany's behalf at the end of World War I based on U.S. President Woodrow Wilson's Fourteen Points, which included immediately transforming the government into a parliamentary system, by handing over the office of chancellor to SPD Chairman Friedrich Ebert and unilaterally proclaiming the abdication of Emperor Wilhelm II. Read more on Wikipedia

Prince Maximillian of Baden was a German prince and a member of the House of Baden. He was the grandson of Grand Duke Karl Friedrich of Baden and a great-grandson of King William I of Württemberg. He was a liberal politician who served as Chancellor of the German Empire from 1899 to 1900.

Page views of Prince Maximilian of Badens by language

Among politicians, Prince Maximilian of Baden ranks 1,785 out of 15,577. Before him are Hor-Aha, John Sigismund, Elector of Brandenburg, Dorgon, Ammar ibn Yasir, Carloman of Bavaria, and Otto Strasser. After him are Gordian I, Louis the Child, Ziying, Infante Juan, Count of Barcelona, Munjong of Joseon, and James E. Webb.