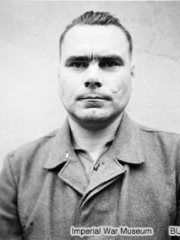 Josef Kramer (10 November 1906 – 13 December 1945) was Hauptsturmführer and the Commandant of Auschwitz-Birkenau (from 8 May 1944 to 25 November 1944) and of the Bergen-Belsen concentration camp (from December 1944 to its liberation on 15 April 1945). Dubbed the Beast of Belsen by camp inmates, he was a German Nazi war criminal, directly responsible for the deaths of thousands of people. Read more on Wikipedia

Josef Kramer was a Nazi SS officer who was in charge of the Auschwitz concentration camp. He is most famous for his role in the Holocaust.

Among politicians, Josef Kramer ranks 1,647 out of 15,577. Before him are Libius Severus, Crazy Horse, Pharamond, Ptolemy IX Lathyros, Empress Lü, and Axel Oxenstierna. After him are Šuppiluliuma I, Shinzō Abe, Soong Mei-ling, Mago Barca, Uzun Hasan, and Tancred, Prince of Galilee.