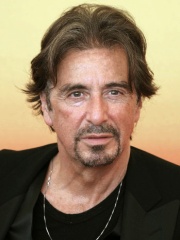 Alfredo James Pacino (; Italian: [paˈtʃiːno]; born April 25, 1940) is an American actor. Considered one of the most influential actors of the 20th century, he has received numerous accolades: including an Academy Award, two Tony Awards, and two Primetime Emmy Awards, making him one of the few performers to have achieved the Triple Crown of Acting. He has also been honored with the AFI Life Achievement Award, the Cecil B. Read more on Wikipedia

Al Pacino is most famous for his role as Michael Corleone in the Godfather trilogy.

Among people born in 1940, Al Pacino ranks 3. Before him are Pelé and Bruce Lee. After him are John Lennon, Margrethe II of Denmark, Nursultan Nazarbayev, Chuck Norris, Constantine II of Greece, Saparmurat Niyazov, Ringo Starr, Michael Gambon, and Bartholomew I of Constantinople.