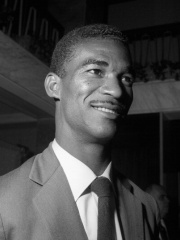 Waldyr Pereira, also known as Didi (Portuguese pronunciation: [dʒiˈdʒi]; 8 October 1928 – 12 May 2001), was a Brazilian footballer who played as a midfielder or as a forward. He played in three FIFA World Cups (1954, 1958, and 1962), winning the latter two and was awarded the Golden Ball, given to the tournament's best player, for his performance at the 1958 competition. Considered as an elegant and technical player, Didi was renowned for his range of passing, stamina and technique. Read more on Wikipedia

Didi is most famous for being the founder of Didi Chuxing, China's largest ride-hailing company.

Page views of Didis by language

Among soccer players, Didi ranks 31 out of 16,880. Before him are Sándor Kocsis, Rivellino, Mário Zagallo, Just Fontaine, Gunnar Nordahl, and Sócrates. After him are Carlos Alberto Torres, Vavá, Stanley Matthews, Karl-Heinz Rummenigge, Mircea Lucescu, and Ronaldinho.