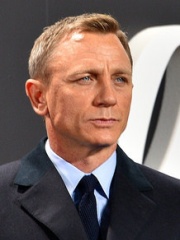 Daniel Wroughton Craig (born 2 March 1968) is an English actor. He gained international fame playing the secret agent James Bond in five films in the film series, from Casino Royale (2006) up to No Time to Die (2021).After training at the National Youth Theatre in London and graduating from the Guildhall School of Music and Drama in 1991, Craig began his career on stage. He began acting with the drama The Power of One (1992), and had his breakthrough role in the drama serial Our Friends in the North (1996). Read more on Wikipedia

Daniel Craig is most famous for being the actor who portrayed James Bond in the 2006 film Casino Royale.

Among people born in 1968, Daniel Craig ranks 3. Before him are Will Smith and Celine Dion. After him are Paolo Maldini, Felipe VI of Spain, Hugh Jackman, Mika Häkkinen, Naomi Watts, Gillian Anderson, Kolinda Grabar-Kitarović, Didier Deschamps, and Marine Le Pen.