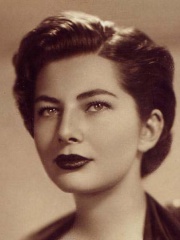 Soraya Esfandiary-Bakhtiary (Persian: ثریا اسفندیاری بختیاری‎, romanized: Sorayâ Esfandiyâri-Baxtiyâri; 22 June 1932 – 26 October 2001) was the queen consort of Iran as the second wife of Shah Mohammad Reza Pahlavi, whom she married in 1951. Their marriage suffered many pressures, particularly when it became clear that she was infertile. She rejected the Shah’s suggestion that he might take a second wife in order to produce an heir, as he rejected her suggestion that he might abdicate in favor of his half-brother. Read more on Wikipedia

Soraya Esfandiary-Bakhtiary was a Persian woman who was married to the Shah of Iran, Mohammad Reza Pahlavi. She was a writer and an advocate for women's rights.

Among companions, Soraya Esfandiary-Bakhtiary ranks 86 out of 687. Before her are Catherine of Austria, Queen of Portugal, Hecuba, Princess Alice, Duchess of Gloucester, Elisabeth Christine of Brunswick-Wolfenbüttel, Yakov Dzhugashvili, and Margaret of Austria, Queen of Spain. After her are Isabella of Austria, Maria Feodorovna, Hortense de Beauharnais, Athaliah, Elisabeth Farnese, and Josephine of Leuchtenberg.

Among COMPANIONS In Iran

Among companions born in Iran, Soraya Esfandiary-Bakhtiary ranks 3. Before her are Salman the Persian (568) and Tughril (990). After her are Shahnaz Pahlavi (1940) and Leila Pahlavi (1970).