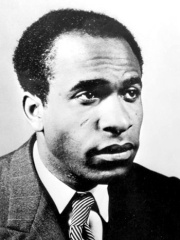 Frantz Omar Fanon (, US: ; French: [fʁɑ̃ts fanɔ̃]; 20 July 1925 – 6 December 1961), also known as Ibrahim Frantz Fanon, was a French West Indian psychiatrist and political philosopher from the French colony of Martinique (today a French department). His works have become influential in the fields of post-colonial studies, critical theory and Marxism. As well as being an intellectual, Fanon was a political radical, Pan-Africanist, and Marxist humanist concerned with the psychopathology of colonization and the human, social, and cultural consequences of decolonization.In the course of his work as a physician and psychiatrist, Fanon supported the Algeria's War of independence from France and was a member of the Algerian National Liberation Front. Read more on Wikipedia

Since 2007, the English Wikipedia page of Frantz Fanon has received more than 1,749,068 page views. His biography is available in 48 different languages on Wikipedia making him the 473rd most popular writer.

Others born in Martinique

Among WRITERS In Martinique