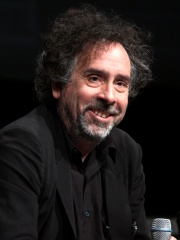 Timothy Walter Burton (born August 25, 1958) is an American film director, producer, writer, and artist. He is best known for his gothic fantasy and horror films such as Beetlejuice (1988), Edward Scissorhands (1990), The Nightmare Before Christmas (1993), Ed Wood (1994), Sleepy Hollow (1999), Corpse Bride (2005), Sweeney Todd: The Demon Barber of Fleet Street (2007), Frankenweenie (2012), the superhero films Batman (1989) and Batman Returns (1992), the sci-fi film Planet of the Apes (2001), the fantasy-drama Big Fish (2003), the musical adventure film Charlie and the Chocolate Factory (2005), and the fantasy films Alice in Wonderland (2010) and Miss Peregrine's Home for Peculiar Children (2016). Burton has often worked with actor Johnny Depp and composer Danny Elfman, who has composed scores for all but three of the films Burton has directed. Read more on Wikipedia

Tim Burton is most famous for his dark, quirky, and sometimes macabre films, such as Edward Scissorhands, Beetlejuice, and The Nightmare Before Christmas.