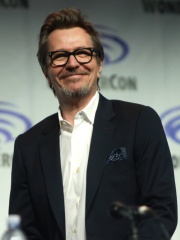 Gary Leonard Oldman (born 21 March 1958) is an English actor and filmmaker. Known for his versatility and intense acting style, he has received various accolades, including an Academy Award, a Golden Globe Award, and three British Academy Film Awards. His films have grossed over $11 billion worldwide, making him one of the highest-grossing actors of all time.Oldman began acting in theatre in 1979 and made his film debut in Remembrance (1982). Read more on Wikipedia

Gary Oldman is most famous for his roles in the films Harry Potter and the Prisoner of Azkaban, Tinker Tailor Soldier Spy, and The Dark Knight.