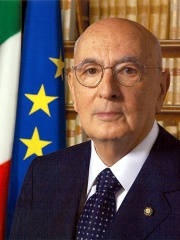 Giorgio Napolitano (Italian: [ˈdʒordʒo napoliˈtaːno]; born 29 June 1925) is an Italian politician who served as the 11th President of Italy from 2006 to 2015, and the only Italian president to be reelected to the presidency. Due to his dominant position in Italian politics, some critics have sometimes referred to him as Re Giorgio ("King George"). Read more on Wikipedia

Among politicians, Giorgio Napolitano ranks 1,255 out of 15,710. Before him are Esarhaddon, Henry the Lion, Meritaten, Feodor II of Russia, Ur-Nammu, and Neoptolemus. After him are Christine Lagarde, Boris Johnson, Elizabeth of Luxembourg, Manuel II of Portugal, Den, and Louis Philippe II, Duke of Orléans.