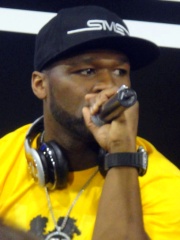 Curtis James Jackson III (born July 6, 1975), known professionally as 50 Cent, is an American rapper, actor, and businessman. Known for his impact in the hip hop industry, he has been described as a "master of the nuanced art of lyrical brevity".Born in the South Jamaica neighborhood of Queens, Jackson began selling drugs at age 12 during the 1980s crack epidemic. He later began pursuing a musical career, and in 2000 he produced Power of the Dollar for Columbia Records; however, days before the planned release, he was shot, and the album was never released. Read more on Wikipedia

50 Cent is most famous for being a rapper, actor, entrepreneur, and investor. He has sold over 30 million albums worldwide and won an Academy Award for Best Original Song for "Won't Back Down" from the movie "8 Mile."

Page views of 50 Cents by language