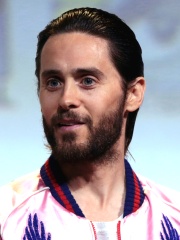 Jared Joseph Leto (; born December 26, 1971) is an American actor and musician. Known for his method acting in a variety of roles, he has received numerous accolades over a career spanning three decades, including an Academy Award and a Golden Globe Award. Additionally, he is recognised for his musicianship and eccentric stage persona as a member of the rock band Thirty Seconds to Mars.After starting his career on the television series My So-Called Life (1994), Leto made his film debut in How to Make an American Quilt (1995) and gained critical attention for his performance in Prefontaine (1997). Read more on Wikipedia

Jared Leto is most famous for his roles in movies such as Requiem for a Dream, Dallas Buyers Club, and Fight Club.