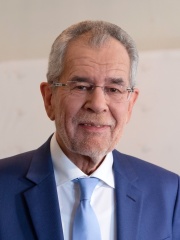 Alexander Van der Bellen (German pronunciation: [alɛˈksandɐ fan deːɐ̯ ˈbɛlən]; born 18 January 1944) is the current president of Austria. He previously served as a professor of economics at the University of Vienna, and after joining politics, as the spokesman of the Austrian Green Party.Van der Bellen was born in Austria to Russian and Estonian parents who were refugees from Stalinism, and he became a naturalized citizen of Austria together with his parents in 1958. Read more on Wikipedia

Among politicians, Alexander Van der Bellen ranks 744 out of 15,577. Before her are Anne of Brittany, Umberto I of Italy, Charles VII, Holy Roman Emperor, Jeroboam, Philip the Arab, and Josiah. After her are Konstantin von Neurath, Louis, Grand Dauphin, Claudius Gothicus, Letizia Ramolino, Karl Liebknecht, and Reza Shah.