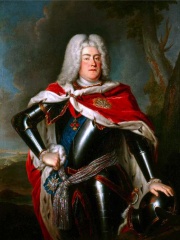 Augustus III (Polish: August III Sas, Lithuanian: Augustas III; 17 October 1696 – 5 October 1763) was King of Poland and Grand Duke of Lithuania from 1733 until 1763, as well as Elector of Saxony in the Holy Roman Empire where he was known as Frederick Augustus II (German: Friedrich August II). He was the only legitimate son of Augustus II the Strong, and converted to Roman Catholicism in 1712 to secure his candidacy for the Polish throne. In 1719 he married Maria Josepha, daughter of Joseph I, Holy Roman Emperor, and became Elector of Saxony following his father's death in 1733. Read more on Wikipedia

Page views of Augustus III of Polands by language

Among politicians, Augustus III of Poland ranks 687 out of 15,577. Before him are Hong Taiji, Michael VIII Palaiologos, Maxentius, Ion Antonescu, Franjo Tuđman, and Afonso I of Portugal. After him are Nebuchadnezzar I, Gwangjong of Goryeo, Robert Gascoyne-Cecil, 3rd Marquess of Salisbury, Louis the Stammerer, Albert I of Belgium, and Yuan Shikai.