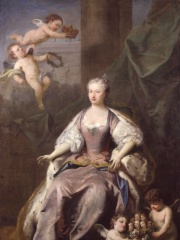 Caroline of Brandenburg-Ansbach (Wilhelmina Charlotte Caroline; 1 March 1683 – 20 November 1737) was Queen of Great Britain and Ireland and Electress of Hanover from 11 June 1727 until her death in 1737 as the wife of King George II. Caroline's father, Margrave John Frederick of Brandenburg-Ansbach, belonged to a branch of the House of Hohenzollern and was the ruler of a small German state, the Principality of Ansbach. Caroline was orphaned at a young age and moved to the enlightened court of her guardians, King Frederick I and Queen Sophia Charlotte of Prussia. At the Prussian court, her previously limited education was widened and she adopted the liberal outlook possessed by Sophia Charlotte, who became her good friend and whose views influenced Caroline all her life. Read more on Wikipedia

Page views of Caroline of Ansbaches by language

Among companions, Caroline of Ansbach ranks 47 out of 673. Before her are Zita of Bourbon-Parma, Magda Goebbels, Salman the Persian, Maria Carolina of Austria, Marie Leszczyńska, and Désirée Clary. After her are Elizabeth Woodville, Mary Boleyn, Mary Tudor, Queen of France, Fawzia Fuad of Egypt, Elisabeth of Valois, and Princess Helena of the United Kingdom.