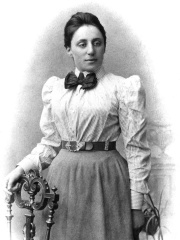 Amalie Emmy Noether (US: , UK: ; German: [ˈnøːtɐ]; 23 March 1882 – 14 April 1935) was a German mathematician who made many important contributions to abstract algebra. She discovered Noether's First and Second Theorem, which are fundamental in mathematical physics. She was described by Pavel Alexandrov, Albert Einstein, Jean Dieudonné, Hermann Weyl and Norbert Wiener as the most important woman in the history of mathematics. Read more on Wikipedia

Emmy Noether is most famous for her contributions to abstract algebra and theoretical physics. She was the first woman to be awarded a full professorship at the University of Göttingen in Germany.

Among mathematicians, Emmy Noether ranks 43 out of 823. Before her are Ada Lovelace, Gottlob Frege, Niels Henrik Abel, Apollonius of Perga, Archytas, and Johann Bernoulli. After her are Charles Sanders Peirce, Eudoxus of Cnidus, Sophie Germain, Claude Shannon, Maria Gaetana Agnesi, and Norbert Wiener.