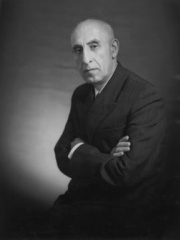 Mohammad Mosaddeq (Persian: محمد مصدق‎; IPA: [mohæmˈmæd(-e) mosædˈdeɢ] (listen); 16 June 1882 – 5 March 1967) was an Iranian politician who served as the 35th Prime Minister of Iran, holding office from 1951 until 1953, when his government was overthrown in the 1953 Iranian coup d'état orchestrated by the United States' Central Intelligence Agency and the United Kingdom's MI6.An author, administrator, lawyer and prominent parliamentarian, his administration introduced a range of social and political measures such as social security, land reforms and higher taxes including the introduction of taxation of the rent on land. His government's most significant policy, however, was the nationalization of the Iranian oil industry, which had been built by the British on Persian lands since 1913 through the Anglo-Persian Oil Company (APOC/AIOC), later known as British Petroleum (BP).Many Iranians regard Mosaddegh as the leading champion of secular democracy and resistance to foreign domination in Iran's modern history. Following an initial, failed coup attempt by the CIA/MI6-backed General Fazlollah Zahedi, Mosaddegh resigned four days later on 19 August 1953, with Zahedi succeeding him as prime minister.While the coup is at times referred to in the West as Operation Ajax after its CIA cryptonym, in Iran it is referred to as the 28 Mordad 1332 Coup d'état, after its date on the Iranian calendar. Read more on Wikipedia

Since 2007, the English Wikipedia page of Mohammad Mosaddegh has received more than 1,506,249 page views. His biography is available in 49 different languages on Wikipedia making him the 977th most popular politician.

Among politicians, Mohammad Mosaddegh ranks 972 out of 14,801. Before him are Fahd of Saudi Arabia, Christian VIII of Denmark, Dionysius I of Syracuse, Carloman II, Henry I of England, and Sigismund I the Old. After him are Louis I of Spain, Romanos III Argyros, Arthur Henderson, Alfonso VI of León and Castile, Clara Petacci, and Leo VI the Wise.