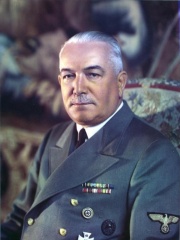 Konstantin Hermann Karl Freiherr von Neurath (2 February 1873 – 14 August 1956) was a German diplomat who served as Foreign Minister of Germany between 1932 and 1938. Born to a Swabian noble family, Neurath began his diplomatic career in 1901. He fought in World War I and was awarded the Iron Cross for his service. Read more on Wikipedia

Since 2007, the English Wikipedia page of Konstantin von Neurath has received more than 444,424 page views. His biography is available in 43 different languages on Wikipedia making him the 703rd most popular politician.

Among politicians, Konstantin von Neurath ranks 698 out of 14,801. Before him are François Hollande, Gallienus, Christian IX of Denmark, Theresa May, Sibylla, Queen of Jerusalem, and Herbert Hoover. After him are Alberto Fujimori, John I of France, Yeongjo of Joseon, Lucius Tarquinius Priscus, Henry VII, Holy Roman Emperor, and Jean-Bédel Bokassa.