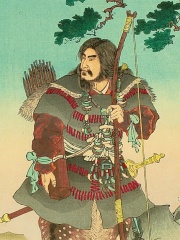 Emperor Jimmu (神武天皇, Jinmu-tennō) was the first Emperor of Japan according to legend. His accession is traditionally dated as 660 BC. In Japanese mythology, he was a descendant of the sun goddess Amaterasu, through her grandson Ninigi, as well as a descendant of the storm god Susanoo. He launched a military expedition from Hyuga near the Seto Inland Sea, captured Yamato, and established this as his center of power. Read more on Wikipedia

Since 2007, the English Wikipedia page of Emperor Jimmu has received more than 1,240,115 page views. His biography is available in 53 different languages on Wikipedia making him the 525th most popular politician.

Among politicians, Emperor Jimmu ranks 521 out of 14,801. Before him are Geronimo, Georges Clemenceau, Sergio Mattarella, Władysław II Jagiełło, Maximian, and Didius Julianus. After him are Agrippina the Younger, Robert F. Kennedy, Eduard Shevardnadze, Abdulmejid II, Ernst Kaltenbrunner, and Leopold II of Belgium.

Others Deceased in 585 BC