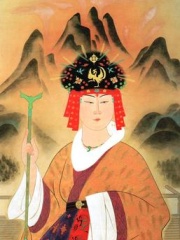 Himiko (卑弥呼, c. 170–248 AD), also known as Shingi Waō (親魏倭王, "Ruler of Wa, Friend of Wei"), was a shamaness-queen of Yamatai-koku in Wakoku (倭国). Early Chinese dynastic histories chronicle tributary relations between Queen Himiko and the Cao Wei Kingdom (220–265) and record that the Yayoi period people chose her as ruler following decades of warfare among the kings of Wa. Early Japanese histories do not mention Himiko, but historians associate her with legendary figures such as Empress Consort Jingū, who is said to have served as regent from 201 to 269.Scholarly debates over the identity of Himiko and the location of her domain, Yamatai, have raged since the late Edo period, with opinions divided between northern Kyūshū or traditional Yamato Province in present-day Kinki. Read more on Wikipedia

Himiko is most famous for being the first female ruler of Japan.

Page views of Himikos by language

Among politicians, Himiko ranks 1,071 out of 15,577. Before her are Saud of Saudi Arabia, Otto IV, Holy Roman Emperor, Shoshenq I, Chlothar II, Sigismund I the Old, and Adolphe Thiers. After her are Yulia Tymoshenko, Klas Pontus Arnoldson, Ariq Böke, Dionysius I of Syracuse, Alfredo Stroessner, and Rashid-al-Din Hamadani.