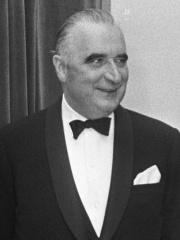 Georges Jean Raymond Pompidou ( POMP-id-oo, French: [ʒɔʁʒ pɔ̃pidu] (listen); 5 July 1911 – 2 April 1974) was a French politician who served as President of France from 1969 until his death in 1974. He previously was Prime Minister of France of President Charles de Gaulle from 1962 to 1968—the longest tenure in the position's history. In the context of the strong growth of the last years of the Trente Glorieuses, Pompidou continued De Gaulle's policy of modernisation, symbolised by the presidential use of the Concorde, the creation of large industrial groups and the launch of the high-speed train project (TGV). Read more on Wikipedia

Among politicians, Georges Pompidou ranks 462 out of 15,577. Before him are Ögedei Khan, Mary of Burgundy, Osman III, Radovan Karadžić, Ferdinand III, Holy Roman Emperor, and Augustus II the Strong. After him are Lothair I, Arcadius, Robert the Bruce, Handan Sultan, Rudolf Höss, and Geoffrey Plantagenet, Count of Anjou.