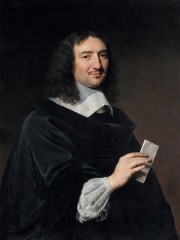 Jean-Baptiste Colbert (French: [ʒɑ̃.ba.tist kɔl.bɛʁ]; 29 August 1619 – 6 September 1683) was a French statesman who served as First Minister of State from 1661 until his death in 1683 under the rule of King Louis XIV. His lasting impact on the organisation of the country's politics and markets, known as Colbertism, a doctrine often characterised as a variant of mercantilism, earned him the nickname le Grand Colbert ([lə ɡʁɑ̃ kɔl.bɛʁ]; "the Great Colbert"). A native of Reims, he was appointed Intendant of Finances on 4 May 1661. Colbert took over as Controller-General of Finances, a newly-elevated position, in the aftermath of the arrest of Nicolas Fouquet for embezzlement, an event that led to the abolishment of the office of Superintendent of Finances. Read more on Wikipedia

Jean-Baptiste Colbert was a French politician who served as the minister of finance under King Louis XIV. He is most famous for the mercantilist policies he enacted during his time in office, which were designed to promote France's economic growth and power.

Among politicians, Jean-Baptiste Colbert ranks 715 out of 15,710. Before him are Konstantin von Neurath, Ahmose I, Manuel II Palaiologos, Sima Yi, Grigory Potemkin, and Sargon II. After him are Christian X of Denmark, Al-Ma'mun, Hong Taiji, Charles XIII of Sweden, Cosimo I de' Medici, Grand Duke of Tuscany, and Shunzhi Emperor.