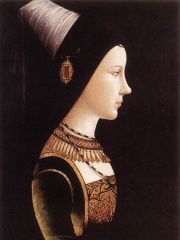 Mary of Burgundy (French: Marie de Bourgogne; Dutch: Maria van Bourgondië; 13 February 1457 – 27 March 1482), nicknamed the Rich, was the ruler of a collection of states (also known collectively as Burgundian territories, Burgundian State or the States of Burgundy) that included the duchies of Burgundy (which was reconquered by the Kingdom of France shortly after Charles the Bold's death), Limburg, Brabant, Luxembourg, the counties of Namur, Holland, Hainaut and other territories, from 1477 until her death in a riding accident at the age of 25.As the only child of Charles the Bold, Duke of Burgundy, and his wife Isabella of Bourbon, she inherited the Burgundian lands at the age of 19 upon the death of her father in the Battle of Nancy on 5 January 1477. In order to counter the appetite of the French king Louis XI for her lands, she married Maximilian of Habsburg, who became Holy Roman Emperor Maximilian I long after her death. The marriage kept large parts of the Burgundian lands from disintegration, but also a change of dynasty from the Valois to the Habsburg (the Duchy of Burgundy itself became a French possession). Read more on Wikipedia

Mary of Burgundy was the daughter of Charles the Bold, Duke of Burgundy and Margaret of York. She was married to Maximilian I, Holy Roman Emperor. Mary is most famous for being the last ruler of the Burgundian Netherlands.

Page views of Mary of Burgundies by language

Among politicians, Mary of Burgundy ranks 457 out of 15,577. Before her are Hongwu Emperor, Otho, Merneptah, Babur, Alfred Rosenberg, and Ögedei Khan. After her are Osman III, Radovan Karadžić, Ferdinand III, Holy Roman Emperor, Augustus II the Strong, Georges Pompidou, and Lothair I.