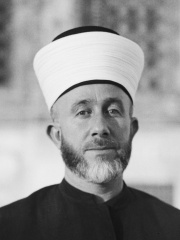 Mohammed Amin al-Husseini (Arabic: محمد أمين الحسيني c. 1897 – 4 July 1974) was a Palestinian Arab nationalist and Muslim leader in Mandatory Palestine.Al-Husseini was the scion of the al-Husayni family of Jerusalemite Arab notables, who trace their origins to the eponymous grandson of Muhammad. After receiving an education in Islamic, Ottoman, and Catholic schools, he went on to serve in the Ottoman army in World War I. At war's end he stationed himself in Damascus as a supporter of the Arab Kingdom of Syria. Read more on Wikipedia

Amin al-husseini was the Grand Mufti of Jerusalem and the leader of the Arab Higher Committee, which was the main political body in Palestine. He is most famous for his role in the Arab Revolt against the British Mandate in Palestine.

Among politicians, Amin al-Husseini ranks 1,041 out of 15,577. Before him are Zeno, Isabel Martínez de Perón, Christian I of Denmark, Faisal I of Iraq, Feodor II of Russia, and Grover Cleveland. After him are Jérôme Bonaparte, Abdullah I of Jordan, Sejo of Joseon, Gustav Stresemann, Meritaten, and Michael VII Doukas.