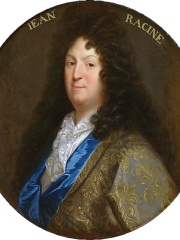 Jean-Baptiste Racine ( rass-EEN, US also rə-SEEN) (French: [ʒɑ̃ batist ʁasin]; 22 December 1639 – 21 April 1699) was a French dramatist, one of the three great playwrights of 17th-century France, along with Molière and Corneille as well as an important literary figure in the Western tradition and world literature. Racine was primarily a tragedian, producing such "examples of neoclassical perfection" as Phèdre, Andromaque, and Athalie. Read more on Wikipedia

Jean Racine is most famous for his dramatic tragedies, "Andromaque," "Phèdre," and "Berenice."

Among writers, Jean Racine ranks 157 out of 5,755. Before him are Heinrich Böll, Joseph Conrad, André Breton, Dr. Seuss, William Faulkner, and Pliny the Younger. After him are Hafez, Fernando Pessoa, Menander, Novalis, Ahmad ibn Hanbal, and Lucian.