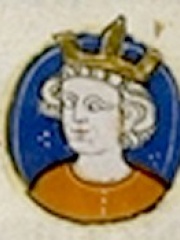 Louis X (4 October 1289 – 5 June 1316), known as the Quarrelsome (French: le Hutin), was King of France from 1314 and King of Navarre as Louis I from 1305 until his death. He emancipated serfs who could buy their freedom and readmitted Jews into the kingdom. Read more on Wikipedia

Louis XIV was most famous for his long reign, which was the longest in European history. He was also famous for the Palace of Versailles, which he built to show off his power.

Page views of Louis X of Frances by language

Among politicians, Louis X of France ranks 405 out of 15,577. Before him are Peisistratos, Frederick III, German Emperor, Boris Godunov, Maximilian I of Mexico, Sergey Lavrov, and Caesarion. After him are Stephen I of Hungary, Servius Tullius, Abdullah of Saudi Arabia, Charles III of Spain, Louis Bonaparte, and Louis VIII of France.