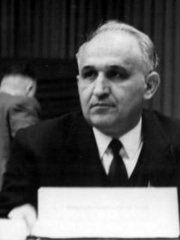 Todor Hristov Zhivkov (Bulgarian: Тодор Христов Живков [ˈtɔdor ˈxristof ˈʒifkof]; 7 September 1911 – 5 August 1998) was a Bulgarian communist statesman who served as the de facto leader of the People's Republic of Bulgaria (PRB) from 1954 until 1989 as General Secretary of the Bulgarian Communist Party. He was the second longest-serving leader in the Eastern Bloc after Yumjaagiin Tsedenbal, the longest-serving leader within the Warsaw Pact and the longest-serving non-royal ruler in Bulgarian history.He became First Secretary of the Bulgarian Communist Party (BCP) in 1954 (General Secretary from April 1981), served as Prime Minister from 1962 to 1971 and from 1971 onwards as Chairman of the State Council, concurrently with his post as First Secretary. He remained in these positions for 35 years, until 1989, thus becoming the second longest-serving leader of any European Eastern Bloc nation after World War II, and one of the longest ruling non-royal leaders in modern history. Read more on Wikipedia

Todor Zhivkov was the leader of Bulgaria from 1954 to 1989. He was most famous for his role in the country's communist regime.

Among politicians, Todor Zhivkov ranks 983 out of 15,710. Before him are Ferdinand I of Romania, Subhas Chandra Bose, Frederick V of the Palatinate, Yeongjo of Joseon, Gojong of Korea, and Tamar of Georgia. After him are Stepan Bandera, Alexander Van der Bellen, Emperor Xuanzong of Tang, Sukjong of Joseon, William Jennings Bryan, and Tedros Adhanom.