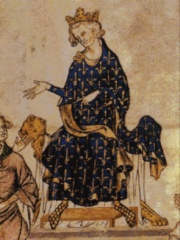 Philip VI (French: Philippe; 1293 – 22 August 1350), called the Fortunate (French: le Fortuné) and of Valois, was the first King of France from the House of Valois, reigning from 1328 until his death in 1350. Philip's reign was dominated by the consequences of a succession dispute. When King Charles IV of France died in 1328, the nearest male relative was his nephew King Edward III of England, but the French nobility preferred Charles's paternal cousin Philip. Read more on Wikipedia

Page views of Philip VI of Frances by language

Among politicians, Philip VI of France ranks 377 out of 15,710. Before him are Priam, Peter III of Russia, Selim III, Philip I of Castile, Abdul Hamid I, and Hafez al-Assad. After him are Syngman Rhee, Narmer, Louis Bonaparte, Şehzade Mustafa, Artaxerxes I of Persia, and Carl XVI Gustaf of Sweden.