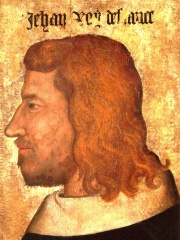 John II (French: Jean II; 26 April 1319 – 8 April 1364), called John the Good (French: Jean le Bon), was King of France from 1350 until his death in 1364. When he came to power, France faced several disasters: the Black Death, which killed nearly half of its population; popular revolts known as Jacqueries; free companies (Grandes Compagnies) of routiers who plundered the country; and English aggression that resulted in catastrophic military losses, including the Battle of Poitiers of 1356, in which John was captured. While John was a prisoner in London, his son Charles became regent and faced several rebellions, which he overcame. Read more on Wikipedia

John II of France is most famous for his involvement in the Hundred Years War and the Battle of Poitiers.

Page views of John II of Frances by language