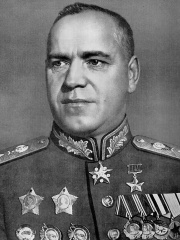 Georgy Konstantinovich Zhukov (Russian: Георгий Константинович Жуков, IPA: [ɡʲɪˈorɡʲɪj kənstɐnʲˈtʲinəvʲɪtɕ ˈʐukəf] (listen); 1 December 1896 – 18 June 1974) was a Marshal of the Soviet Union. He also served as Chief of the General Staff, Minister of Defence, and was a member of the Presidium of the Communist Party (later Politburo). During World War II, Zhukov oversaw some of the Red Army's most decisive victories. Born to a poor peasant family from central Russia, Zhukov was conscripted into the Imperial Russian Army and fought in World War I. Read more on Wikipedia

Georgy Zhukov was most famous for leading the Red Army to victory in World War II.

Among politicians, Georgy Zhukov ranks 243 out of 15,577. Before him are Olof Palme, Ashurbanipal, Puyi, Mars, Enver Hoxha, and Emperor Meiji. After him are James VI and I, Şehzade Bayezid, Woodrow Wilson, Helmut Kohl, Henry II of France, and Philip V of Spain.