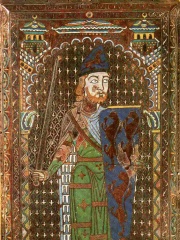 Geoffrey V (24 August 1113 – 7 September 1151), called the Handsome or the Fair (French: le Bel) and Plantagenet, was the Count of Anjou, Touraine and Maine by inheritance from 1129, and also Duke of Normandy by conquest from 1144. His marriage to the Empress Matilda, daughter and heiress of Henry I of England, produced a son, Henry Curtmantle, who succeeded to the English throne as King Henry II (1154–1189) and was the first of the Plantagenet dynasty to rule England; the name "Plantagenet" was taken from Geoffrey's epithet. Read more on Wikipedia

Since 2007, the English Wikipedia page of Geoffrey Plantagenet, Count of Anjou has received more than 466,671 page views. His biography is available in 42 different languages on Wikipedia making him the 512th most popular politician.

Page views of Geoffrey Plantagenet, Count of Anjous by language

Among politicians, Geoffrey Plantagenet, Count of Anjou ranks 508 out of 14,801. Before him are Alexios I Komnenos, Tomáš Garrigue Masaryk, Emperor Gaozu of Han, Margaret of Austria, Duchess of Savoy, John, King of England, and Chagatai Khan. After him are John II of France, Rudolf Höss, Alfonso XIII of Spain, Zenobia, Baibars, and Manuel I Komnenos.