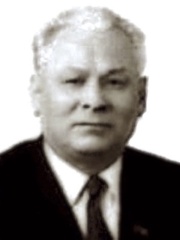 Konstantin Ustinovich Chernenko ( cher-NENK-oh; Russian: Константин Устинович Черненко, IPA: [kənstɐnʲˈtʲin ʊsʲˈtʲinəvʲɪtɕ tɕɪrˈnʲenkə]; 24 September 1911 – 10 March 1985) was a Soviet politician and the fifth General Secretary of the Communist Party of the Soviet Union. He led the Soviet Union from 13 February 1984 until his death on 10 March 1985. Born to a poor family from Siberia, Chernenko joined the Komsomol (the Communist Party's youth league) in 1929 and became a full member of the party in 1931. Read more on Wikipedia

Since 2007, the English Wikipedia page of Konstantin Chernenko has received more than 2,132,573 page views. His biography is available in 74 different languages on Wikipedia making him the 273rd most popular politician.

Among politicians, Konstantin Chernenko ranks 270 out of 14,801. Before him are Philippe Pétain, Godfrey of Bouillon, Hugh Capet, Ahmed II, Ashurbanipal, and Alexander II of Russia. After him are Joachim von Ribbentrop, Theodoric the Great, Cleisthenes, Ferdinand II, Holy Roman Emperor, Elizabeth of Russia, and Sulla.